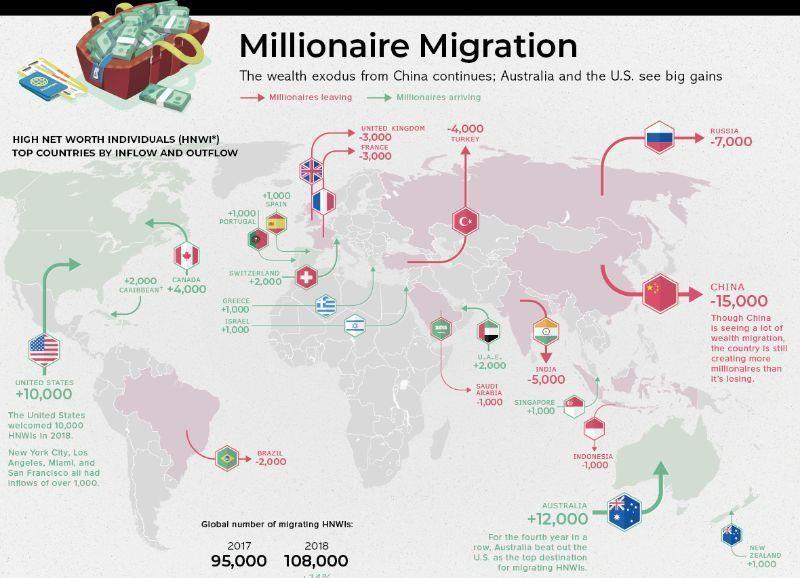 Australia has topped the list as the number one destination worldwide for migrating millionaires.
According to the latest Global Wealth Migration Review from market research consultancy New World Wealth, 12, 000 Special Category Migrants, or those classed as High-Net Wealth Individuals (HNWIs) made their way to Australian shores in 2018 alone. It is the fourth consecutive year that Australia has ranked first on the global list, adding more than 35, 000 wealthy new residents over that time.
Australia landed ahead of the US on the global list, with far greater inflows than the third and fourth-ranked destinations of Canada and Switzerland, with a respective 4, 000 and 3, 000 wealthy individuals added. In terms of outflows, the largest high wealth exodus was from China, with 15, 000 HNWI departing, while Russia, India and Turkey saw the departure of upwards of 4, 000 HNWIs each.
Australia has added 3 percent to its HNWI tally. New World Wealth cites several potential factors for Australia as a preferred destination.
Among these are Australia’s safety rating. Australia is named the number one country for women in a separate New World Wealth report. In addition, the nation’s first-class healthcare system is far cheaper and more accessible compared to American health care.
Also noted is the absence of an inheritance tax in Australia. Individuals with wealth of over $5.5 million in the US are subject to an ‘estate’ tax at rates of as much as 40 percent in the top bracket. Australia is therefore an attractive base from which to continue building wealth for future generations.
Altogether, the report records the number of HNWIs now living in Australia at nearly 370, 000 (the seventh-most of any nation), with 35 of those assessed as billionaires among the 2, 140 worldwide.
The complete New World Wealth Report is available here:
https://www.afrasiabank.com/en/about/newsroom/global-wealth-migration-review-2019
For questions about Australian visas, or to deal with relevant visa application please email to yana@becomeaustralian.com  Yana Asmalovskaya,  Migration Agent 0957026